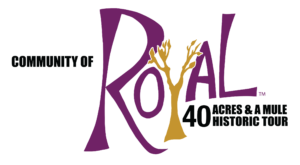 The Community of Royal is a nationally unique example of an increasingly rare aspect of African American history; rural, agricultural heritage. The community’s existence for approximately 150 years means it directly intersects several important historical themes in both Florida and the nation.

Royal’s earliest African American settlers were granted land patents in the
1870s (with some likely present prior to this). Over the following century, the town developed into a substantial agricultural community. Today, many of the descendants of these earlier Black agriculturalists continue to occupy the buildings and properties developed by their ancestors.

Oral histories with elderly informants in recent decades suggest the potential that many of these early residents interacted with free African Americans who arrived in previous decades.

Historical documents and archaeological evidence already note the existence of free Blacks in the area during the 1830s. Although the period of significance for the Community of Royal Rural Historical District begins with the 1870s, it is clear the African American history of the area starts much earlier.

Royal’s uniqueness stems in large part from its survival. Throughout the 20th century it became increasingly difficult for African Americans to live in rural locations. The perseverance of Royal’s community is the primary reason it survives in the 21st century. Efforts to commemorate this history, by organizations like Young Performing Artists (YPAs) Inc. also play a significant
role.

Royal is a strong, vibrant community that values its history.

Royal’s location may have offered the community a measure of protection in the past. Other locations that did not survive as African American communities, places like Rosewood and Santos – unlike Royal – were both located along railroads. While a lack of rail travel was likely inconvenient for Royal’s residents, it may have also served to insulate their community.
Although the area around Royal is good agricultural land, its relative geographical isolation played a role in protecting the community from destruction and development. Today, Royal is no longer isolated, and development represents the primary threat to the community’s historical
integrity.

In closing, the community of Royal offers a unique and fascinating example of African American life in Florida. It is representative of agricultural trends beginning during the frontier times of the state’s history and its development into the mid-20th century. Royal, as one of the only remaining rural African American towns in the state can offer insight into and highlight important historical trends in African American history.