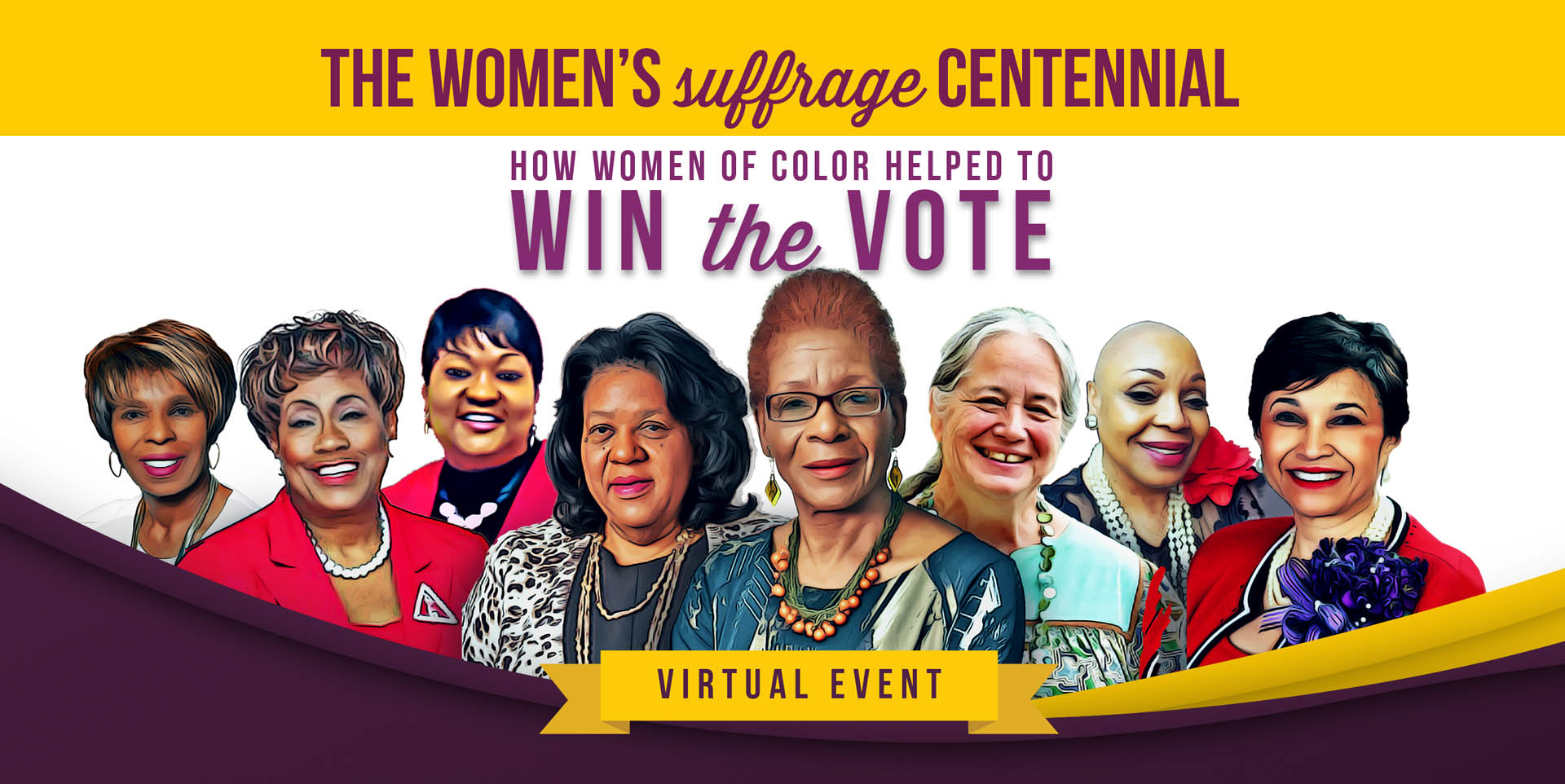 View this nonpartisan, interactive panel discussion celebrating & educating the 100th vote anniversary, illuminating courageous women of color who overcame barriers & whose contributions are rarely emphasized. This event will reflect on how women of color made a moral, spiritual, and intellectual sense of need that all women should have the right to vote.

Hear from the women currently leading Delta Sigma Theta, the renowned organization who played a key role in the 1913 Suffrage March, as well as input from our moderators, inspiring women leading in our communities today. 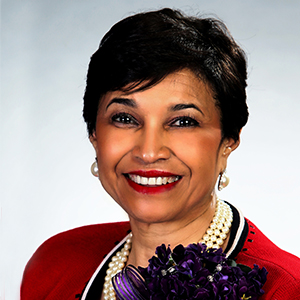 Beverly Evans Smith, Panelist, is the 26th National President of Delta Sigma Theta Sorority, Inc. Initiated into the sorority through the Epsilon Omicron Chapter at Bowling Green State University in October 1967, she has served Delta in many capacities, among them are her tenure as National First Vice President 2013-2017; National Secretary 2008-2013; chair of various regional and national committees; 2002 National Convention Coordinator; and Executive Director, 1998-1990. She has also been an active member of the Marietta-Roswell (GA) Alumnae chapter for over 30 years.

As an entrepreneur, Beverly is also the Senior Vice-President of The HR Group, Inc., a management consulting firm co-owned with her husband, Stephen, for thirty years. As a corporate manager, she spent eighteen years in leadership positions with AT&T (Southern Bell). As an educator Beverly was a college administrator at Kent State University (Ohio), and Georgia State University, among other teaching and administrative positions. 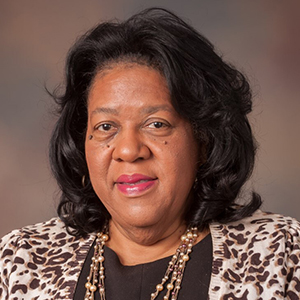 The Commission is comprised of 14 women of diverse economic, professional, and cultural backgrounds. Ten members were appointed by elected representatives and four women were appointed from within other federal government agencies. Ms. Hill were appointed by Senate Minority Leader Chuck Schumer.

The Commission’s mission is to commemorate and coordinate the nationwide celebration of the 100 th anniversary od the 19 th Amendment and to educate the American people about the efforts and undertakings of the women’s suffrage movement in the United States in a nonpartisan fashion.

Also, Ms. Hill is the President and CEO of the Harriet Tubman Home – a National Historical Park established to manage and operate the homestead of Harriet Tubman. In her role at the Tubman Home, Hill shares Tubman’s core values with visitors that tour the property. She was also influential in establishing Tubman’s home as a National Historic Park.

Also, she is the Founder, Maryland Women’s History Project, Maryland Commission for Women, 1980 to present. Coordinated development of 20 educational kits on widely varied aspects of women’s history and creation of the Maryland Women’s Heritage Trail

Retired Co-Founder and First Executive Director, Maryland Women’s Heritage Center and Museum. Coordinated research, exhibits, programs and curriculum development on inclusive women’s history with particular emphasis on multicultural history. Directed creation of extensive materials, programs and permanent exhibits on diverse areas of women’s history ranging from Women in the Arts to The Women of NASA (in collaboration with the Women of NASA)

Joyce Cotton, Director of Marketing and Community Partnerships, has worked in the television industry for 45 years, beginning her broadcasting career with Scripps Howard Broadcasting WEWS in Cleveland, Ohio.

In 2000, Joyce retired from WFTS ABC 28 after a 25 year career in traffic & sales and began a new career in the non-profit sector, joining the underwriting department at WEDU PBS, west central Florida’s only PBS television broadcast station and public media company where she has worked for 19 years.

Most notable programs and community engagement events in which Joyce was instrumental in bringing to the community are WEDU PBS local documentaries such as Central Avenue Remembered, Extraordinary Grace: The Reverend A. Leon Lowry Tribute, Breakthrough Through Hope: Autism Town Halls and community preview screening events for the national PBS documentaries The Freedom Riders, 50th Anniversary of The March on Washington. Individuals from the Tampa Bay area who were at The March were recognized in a series of vignettes entitled “Memories of the March”. Retired Negro League baseball players from Tampa and shared their stories about the significance of Jackie Robinson and his role in integrating the National Baseball League.

Dr. Paulette C. Walker, Moderator, is the first National President to sign her own along with her line sisters’ 50th-year certificate. She was initiated through the Epsilon Chapter of Michigan State University. A retired mathematician educator: she was known as the “numbers president” for her ability to incorporate math problems in many of her keynote addresses. To honor Delta Sigma Theta’s 25TH National President, the Dr. Paulette C. Walker Endowed Scholarship Fund was established in August 2012 her alma mater. In partnership with the Michigan State University Black Alumni Association, the scholarship supports educational development, student retention, and matriculation.

In July 2011, she retired as the Director of Undergraduate Programs and Internship in the College of Education at the University of South Florida.

Throughout her career, Dr. Walker received numerous awards from several professional, civic and religious organizations. These flowed from her hard work and belief that every person has a special gift that should be shared with the world. She is the recipient of the Hank Nuwer Anti-Hazing Hero Award; Ronald McNair Scholars Research Mentor Award; Ronald McNair Scholars Role Model Mentor Award; Outstanding Undergraduate Advisor Award from the University of South Florida; Certificate of Merit, Institutional Award, American College Testing Program and National Academic Advising Association; and the President’s Affirmative Act Award, University of South Florida.
Also, she is the co-author a book, “We Can Have Better Urban Schools.”

Do you have a question?

If you have a question for one of our panelists, be sure to submit, using the form below. We will do our best to address all questions.

This project is sponsored in part by the Sisters Of Suffrage, Leesburg, Alumnae Chapter Delta Sigma Theta Sorority, Inc., Tampa Metropolitan Alumnae Chapter Delta Sigma Theta Sorority, Inc., The Message Is Ministry, Black Gold Compost, CEMEX, The Steele Organization (TSO), LLC, Department of State, Division of Cultural Affairs, the Florida Council of Arts and Culture and the State of Florida and the National Endowment for the Arts” (Section 286.25, Florida Statutes), through a grant from the Florida Humanities with funds from the National Endowment for the Humanities. Any views, findings, conclusions, or recommendations expressed in this (publication) (program) (exhibition) (website) do not necessarily represent those of Florida Humanities or the National Endowment for the Humanities.